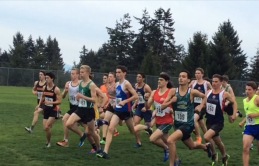 Kendra Lewis ran a great 3 km race for the 13 years old girls, leading the pack from start to finish.

Lewis achieved a personal best by 30 sec., running for the first time under 10 min with a new  result of 9:54. At the same distance, Stephanie Berringer, who ran her best race of the year,  came 5th in the 12 year old age group with a great time of 11:45.

The distance for the 16-17 year olds was 5km. It was the most spectacular race of the day, not only as the last race of the championships, but because fans were witness to top elite athletes from the both within the province and nationally.  A few of them have had international experience, including Sean Bergman, a Canadian Champion and record holder in 2000m Steeplechase, who is ranked top 10 in the world at the last World Championship in Cali, Columbia.

It was a thrilling race from start to finish  for  two Vancouver cross country leaders, Thomas Nobbs of VOC, Kieran Lumb of Lord Byng, and Sean Bergman of Okanagan Athletics Club, running shoulder to shoulder to the end. It was a photo finish,  with first place awarded to Thomas Nobbs,  the new BC champion.  Thomas had a tremendous performance with a time of 15:34.57 and Lumb, in second  place, with 3/100 of the sec. behind Nobbs. Bergman, also had a great race, coming third to the finish line with the time of 15:38.

This past year, Nobbs has had  a spectacular  improvement in his results in all the events.

Sixteen year old, Ben Paetzel, is improving quickly and ran a solid race with a good time of 18:02.

Congratulations to all VOC athletes for a remarkable finish to the 2015 Cross Country season.

Congratulations to our U16 VOC athletes, @adriasellers and @sophief0rsyth on their recent award with @bc.athletics ! . . #yvr #vocathletics #trackandfield #trackclub #xcountry #awards #bcathletics #hurdles #steeplechase
Congratulations to our very own Besnik Mece on being awarded the U16/U18 Coach of the Year for 2019 through @bc.athletics . . #yvr #voc #bcathletics #trackandfield #xcountry #coachoftheyear2019
Track and Field practices start up January 9, 2020. Get your spikes 👟 ready for a great season.
As 2019 draws to an end, we're getting ready for the 2020 Track season. Have a safe holiday season and we'll see you in January!
Coaches, Teachers and Track and Field Enthusiasts, Preparation is underway for the The 2020 VOC Annual Elementary and High School Track and Field Meet.  Mark the date, April 17 & 18 on your calendars so your athletes won’t miss this awesome event.
Congratulations to two of our VOC Athletes who signed this week with top Universities: 🏃‍♀️ Kendra Lewis - full scholarship with Villanova University in Pennsylvania 🏃‍♂️ Dylan Uhrich - scholarship with UBC in Vancouver, Canada. . . We are so proud of them and wish them much luck with their Post Secondary Education and Athletic Programs. . . #yvr #vocathletics #trackandfield #postsecondary #ubcthunderbirds #villanovauniversity #canada #unitedstates #runners